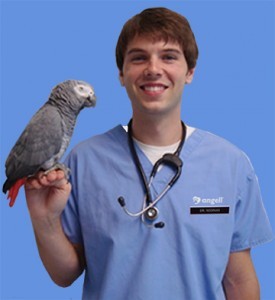 Adrenal disease (Adrenocortical disease, ACD) is one of the most commonly diagnosed neoplasms in the domestic ferret, (Mustela putorius furo) second only to insulinoma, another tumor of endocrine origin.1 Unlike Cushing’s disease in dogs and cats, the main layer of the adrenal gland affected in  ACD of ferrets is the zona reticularis where an overproduction of sex steroids is responsible for clinical signs rather than cortisol. Spaying and neutering ferrets is presumed to play a large role in the development of ACD by removing the normal feedback mechanism to the pituitary and hypothalamus in response to surges of LH and FSH. As a result, undifferentiated cells of the adrenal gland become stimulated by these unchecked surges and cause production of estrogen and other sex steroid metabolites (androstenedione and hydroxyprogesterone). This leads to hyperplastic and/or neoplastic changes of the adrenal gland. Prolonged photoperiod in a naturally crespuscular (active at dawn and dusk) animal has also been implicated in causing decreased melatonin production and therefore preventing its antigonadotropic effects. Genetics, diet and an aberrant tumor suppressor gene also may contribute to the high incidence of ACD.2 Clinical signs typically develop in middle aged ferrets, average 4.5 years old, but any age can be affected.1 No gender predilection has been described. The most consistent finding in over 90% of cases is progressive alopecia developing over the dorsal hips and tail. Vulvar enlargement is frequently described in females with  ACD as would be seen in intact females in estrus. Males may present for partial or complete urinary obstruction secondary to prostatic enlargement. Prostatic cysts, prostatic abscess and prostatitis have all been observed. Pruritus over the dorsum, aggression between cage mates, or worsening musky odor can happen in combination or as the sole clinical sign. A complete blood count is typically within reference range though estrogen induced bone marrow suppression is possible. A chemistry panel is often normal with occasional elevations in alanine aminotransferase of unknown significance.2 Elevated hormone levels can confirm the diagnosis by submitting the ferret adrenal hormone panel through the University of Tennessee. This is a useful screening test when some of the non-specific clinical signs, such as recent onset of aggression, are noticed. Radiographs can be useful to ensure that other disease processes are not present but rarely reveal calcification of the adrenal or organ displacement unless the tumor is palpable. Ultrasound can also confirm ACD and help with surgical planning by determining unilateral or bilateral disease.

Treatment is generally broken down into medical and surgical management. Hormone therapies, primarily through GnRH agonists, are the mainstay of medical treatment.  Depot formation of leuprolide acetate (Lupron Depot, TAP Pharmaceuticals) can be given as monthly intramuscular injections (or less frequently depending on the formulation).2 A slow release subcutaneous implant of deslorelin acetate (Suprelorin, Peptech Animal Health) can also be applied and can control clinical signs from 8-30 months.3 Annual replacement of the implant or waiting for recurrence of clinical signs is recommended. However, medical management does nothing to slow down the progression of the adrenal tumor or prevent potential metastasis. Instead the GnRH agonist creates a negative feedback loop which decreases the production of LH and FSH and down-regulates the receptors which reduces the expression of clinical signs.2 Surgical management provides definitive treatment of the disease with the goal of debulking or completely excising the tumor. The right adrenal gland proves more difficult to remove due to its proximity to the caudal vena cava and may influence the surgeon’s decision regarding treatment. Electing surgical vs. medical management can also be affected by the patients concurrent disease, age, severity of clinical signs, owner compliance, and financial concerns.2

Prognosis depends on the type of disease and method of management. Response to treatment is often noted within the first 2 weeks, while regrowth of hair can take up to 6 weeks.2 Surgical removal of the diseased gland results in resolution of clinical signs with survival rates as high as 98% at 1 year and 88% 2 years postoperatively.4 Recurrence in the contralateral gland has been reported as high as 17% so owners should watch for relapse of clinical signs regardless of treatment method chosen.5 Prognosis for medical management is unpredictable and depends on how aggressive the adrenal tumor is and which additional clinical signs are associated.

Given the frequency with which adrenal disease is diagnosed in pet ferrets options for prevention of disease are being researched. The strongest association with development of ACD is related to surgical sterilization. Since neutering prevents life threatening estrogen toxicity related bone marrow suppression in females, decreases aggression in males and greatly reduces the musky odor in both sexes‑it is a necessary step to improve their suitability as pets.5 The use of deslorelin has shown promise as an alternative to surgical sterilization6 and may reduce development of ACD in neutered ferrets but conclusive studies have yet to be published.

For more information about adrenal disease in ferrets or Angell’s Avian and Exotic service, please call 617 989-1561 or e-mail avianexotic@angell.org. You can also reach Dr. Noonan at bnoonan@angell.org.