Anticholinergics in Dogs and Cats 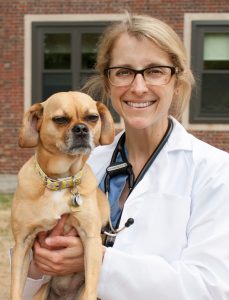 Anticholinergics, also known as antimuscarinics, have long been used to treat and prevent bradycardia during the anesthetic period (Figure 1). Atropine and glycopyrrolate are the two most commonly used drugs of this class within veterinary medicine. More often than not, anesthetic bradycardia is due to drug effects or vagally-mediated processes. In determining whether or not to include and/or administer an anticholinergic as part of a premed or in response to bradycardia during the anesthetic period, one needs to consider certain patient factors and consider other concurrently administered drugs.

Anticholinergics’ primary mechanism of action is to act as parasympatholytics in that they competitively block acetylcholine from acting as a neurotransmitter at muscarinic receptors. There are five muscarinic receptor subtypes, but the M2 receptor plays the largest role in heart rate (HR) maintenance given its location in the sinoatrial and atrioventricular nodes of the heart.1,2 Other known effects of anticholinergics include bronchodilation, decreased salivation and airway secretions, mydriasis (higher likelihood after topical administration), and gastrointestinal effects (e.g., reduced lower esophageal sphincter tone, which can increase the risk of gastroesophageal reflux and aspiration).1,2 These other effects are due to muscarinic receptor binding in different tissues throughout the body.

There are a few absolute indications for anticholinergic administration in a premedication. These include neonatal and pediatric patients (those < 3-4 months in which cardiac output (CO) is dependent on HR), patients with low resting HR due to cardiac conduction disturbances, systemic disease, or high resting vagal tone, and lastly, patients with advanced degenerative valvular disease as bradycardia increases filling time and increases regurgitation.

The absolute contraindications for anticholinergics in premeds include patients with underlying tachydysrhythmias, patients with hypertrophic or other restrictive cardiomyopathies in which CO decreases with reduced filling time/reduced stroke volume, and hyperrexic patients.

In following with the indications and contraindications, there are a few hazy areas regarding to anticholinergic use.

As an overriding rule, the author recommends more common use of anticholinergics as needed in anesthetized patients to maintain HR in a normal range, helping to preserve blood pressure and cardiac output. It is advisable as part of the anesthetic protocol or record to have an emergency dose of atropine calculated and access to anticholinergics within a reasonable distance. In the face of non-life-threatening drops in HR, the author recommends starting with lower doses of anticholinergic, knowing you can always supplement more if HR does not sufficiently increase (Table 1). The effects of tachycardia, while short-lived, can be more detrimental to the anesthetized patient.

Table 1: Atropine vs. glycopyrrolate – drug effects on the cardiovascular system similar in dogs and cats

*Depending on the dose of anticholinergic given, it is not uncommon to see a worsening of the bradycardia before HR increases. This is thought to be due to blockade of presynaptic M1 receptors that normally inhibit acetylcholine release. HR should increase within 5-10 minutes, but if the effects of the bradycardia cannot be tolerated, a second smaller dose of the same anticholinergic can be given to initiate M2 receptor blockade.1,2