What Does it Mean if a Dog has Elevated Liver Values? 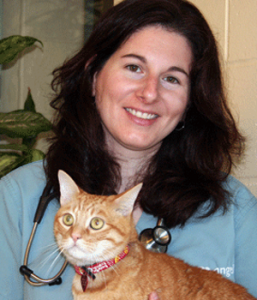 The liver is an amazing organ which carries out over 500 life-sustaining functions. It processes all of the blood leaving the gastrointestinal tract – breaking down toxins, converting medications into forms that can be better used by the body, and creating nutrients. The liver stores energy and iron for future use by the body, helps regulate blood clotting, and clears old red blood cells from circulation. The liver secretes its waste products in the form of bile, a substance which also aids in the digestion of fats.

Your veterinarian may recommend a blood test to check your dog’s liver values. This may be part of a routine screen to get a more complete picture of your dog’s overall health, or your vet may have concerns about your dog’s liver function. Poor appetite, vomiting, lethargy, increased drinking and urination, yellow discoloration of the eyes or skin, seizures, and fluid build-up in the abdomen can all be signs of liver disease.

Below is a breakdown of what your vet is evaluating when he or she looks at “liver values.”

AST and ALT are enzymes contained within liver cells. When levels are increased in the blood, it means that the enzymes have leaked out of the liver cells due to cell damage. AST is found in muscle cells as well as liver cells, so an elevation in AST without a similar elevation in ALT may indicate muscle damage rather than liver damage. Although ALT elevations are specific for liver, there are many non-liver diseases that can indirectly affect the liver and cause increases in ALT. For example, heart failure and intestinal inflammation can cause an increase in ALT up to 4 or 5 times the normal range. Even severe dental disease can cause an elevation in ALT. In terms of primary liver issues, ingestion of certain toxins or chronic inflammation of the liver (due to infection, an over-reaction of the immune system, genetic disorders, etc.) tend to create the most significant ALT elevations.

ALP and GGT are contained in the cells that line the bile ducts – thin tubes that guide the flow of bile from the liver to the small intestine. If bile flow is blocked, these cells increase production of ALP and GGT and release them into the blood. Causes of poor bile flow within the liver include nodular hyperplasia (a benign condition of older dogs), overwhelming infection, cancerous tumors, and blood vessel abnormalities. However, there are several different forms of ALP in the dog and our routine laboratory tests can’t differentiate between them. Dogs under a year old usually have an elevated ALP as a result of bone growth, as there is a form of ALP associated with bone (B-ALP). Dogs taking steroid medication often have an elevated ALP because there is a form stimulated by the presence of steroids (C-ALP). These elevations are not indicative of liver dysfunction. Certain dog breeds, such as Scottish terriers, Siberian huskies, and miniature Schnauzers, also tend to have benign elevations in ALP. And just as with the hepatocellular enzymes, the cholestatic enzymes will also increase due to the effect of non-liver diseases on the liver. Pancreatitis, gall bladder disease, intestinal inflammation, and certain endocrine diseases all increase ALP.

Other routine lab results can also help us identify liver disease. Since the liver is responsible for making albumin (a blood protein) and cholesterol, a low albumin or low cholesterol level might be the result of severe liver disease. Yellowing of the eyes and skin, also known as jaundice or icterus, can occur when the liver is not effectively removing broken-down old red blood cells from circulation. Low blood sugar can result when a diseased liver is not able to release its stored energy.

As you can see, an elevation in liver values doesn’t necessarily mean there is a serious problem with your dog’s liver. Your veterinarian will take into consideration your dog’s breed, age, medical history, as well as recent medications and additional lab results, to determine if there is a benign explanation for the lab results, if monitoring liver values for several months is appropriate, or if further diagnostics are warranted. Additional diagnostics might include x-rays, an abdominal ultrasound, more blood tests (bile acids, ammonia level), or liver biopsy. In any case, the liver has an amazing capacity to regenerate, so the presence of even significantly elevated liver values doesn’t necessarily mean a poor prognosis.