Dr. Bright has been training dogs as a hobby and professionally for over 20 years and previously had a private dog-training, then behavior, practice. Historically, she competed with her former Bull Terriers in Obedience, Agility and/or conformation, with great results. Her dog Fanny was the top Agility Bull Terrier in the U.S. in 2006 and 2007. Bull Terrier Radio was a breed champion and the subject of Dr. Bright’s research on stimulus equivalence (matching-to-sample training) that garnered her a Marian Breland Bailey (MBB) Award from the Association of Applied Behavior Analysis International (ABAI). Dr. Bright won another MBB Award from ABAI for her research on the use of errorless teaching to train a Shelter dog to sit at the sound of a bell (“Pavlov’s Shelter”) when she was not in the dog’s sight. Her bully mix, Ribbon (shown), is a frequent performer in teaching videos Dr. Bright creates for her clients. 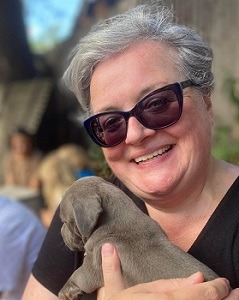 Susan joined the Behavior team at MSPCA-Angell in 2013 and has since earned the Certified Professional Dog Trainer – Knowledge Assessed (CPDT-KA) certification as well as completed a graduate certificate in Applied Behavior Analysis. Susan assists Dr. Bright in her behavior consults, coordinates training classes, and helps to keep the office running smoothly. She earned her Bachelors of Science from Boston University in 1993, where she studied mass communication and psychology. She spent almost a decade working in marketing at Dunkin’ Brands, and received a Masters degree from Emerson College in Integrated Marketing Communication. After switching gears and earning a certificate in Professional Photography at CDIA/BU in 2006, Susan spent several years working as a wedding and portrait photographer, and also began to volunteer at her local shelter photographing the dogs there who were awaiting new homes. This experience led Susan to further explore animal behavior, and she earned a certificate in Canine Behavior and Training from Mount Ida College in 2013. Susan and her husband currently share their home with a Boston Terrier and a Chihuahua mix. Aidan has been training dogs since 2016, and received her CPDT-KA in 2017.  Before working with dogs and their humans, she had a career in Special Education and specialized in working with physically and cognitively disabled children and young adults with severe behavior issues.  As a result, the principles of behavior were always of interest to her, and when she adopted her own anxious four-legged side-kick Zoe in 2012, she found herself applying many of the same behavior modification techniques she had used for years in education.  Despite her best efforts, however, Aidan quickly realized that in order to truly help Zoe, she would need to learn more.  Since that time, she has dedicated her life to learning about dog behavior and helping people better understand their pups.  It was a long-term goal of hers to work in the Behavior Department at the MSPCA, where she continues to learn about how we can help our canine companions live fuller, happier and more enriching lives. Kathy became interested in dog sports as a way to continue training her with reactive dog when traditional obedience classes were not the right fit. Kathy and Clancy trained in agility, rally obedience and Wag It Games and became involved in K9 Nose Work® shortly after the sport migrated to the East Coast in 2010. Kathy was immediately drawn to learn more about the activity and the sport. Clancy was the first Irish Terrier to earn Nose Work titles at levels NW1 through NW3, and Kathy is currently training her dog Pippi in K9 Nose Work®. They began competing in the fall of 2016.

In 2012, Kathy became a partner at Dogs’ Learning Center, and started assisting her instructor with K9 Nose Work® classes. She began instructing in 2013, and continues to learn about K9 Nose Work® through participation in competition, seminars, workshops, and camps. Kathy is a Certified Nose Work Instructor (CNWI) as well as a Karen Pryor Academy Certified Training Partner. “I love watching and learning from dogs as they do what they do best. It is pure joy for the dogs and for their people.” Kathy teaches K9 Nose Work classes from Introduction through Advanced Competition. Beth has been training dogs professionally since 2005. She grew up with pets including a German Shepherd who her father trained to stay in the yard despite moving multiple times for the military. When she got her own dog, she took obedience, rally, agility, tracking and herding classes. Her next dog was a CPE agility champ. She has even trained her cats — sit, recall, and some agility. She thinks of training as a fun way to interact with her animal pals. When she isn’t teaching, training, or playing, she is an Enrolled Agent, a “retired” electrical engineer, and an author of tax books. Marion Long has been assisting, then teaching, “Ruff Diamonds” and Puppy Play & Learn classes since 2012. She is a graduate of Karen Pryor Academy and is a Certified Training Partner (KPA-CTP). Marion has done extensive training with the MSPCA shelter dogs as part of a specially trained group of Nevins Farm volunteers called the “Behavior Mod Squad.” She also fosters shelter dogs and puppies in her home. Marion shares her home with two MSPCA alumni dogs, Heidi, a Beagle/Shepherd mix and Milo, a Chihuahua/Terrier mix. They take classes in agility and other canine sports together routinely. Marion teaches Ruff Diamonds, Puppy Play & Learn, Learn to Train Your Dog and Shy Dog classes. Danielle graduated from Becker College in 1998, earning an Associate’s degree in Animal Care to prepare her for a career working with animals. She cared for small animals as a Laboratory Animal Technician at Harvard University, before spending seven years as a Veterinary Technician at Silver Lake Veterinary Hospital. She has been a full-time dog walker and pet sitter the last 18 years, and recently became the Canine Manager for the Salem Animal Rescue League. Danielle began volunteering as a dog walker at the MSPCA in 2015 and became interested in canine behavior. She became a classroom volunteer, assisting across an array of classes and instructors. Danielle became a class instructor in October 2021 and currently teaches Puppy Play n’ Learn, Teen Class, and Learn to Train Your Dog: Level 1. Danielle shares her home with her beloved Great Pyrenees mix Whitey; he stars in a true Christmas children’s book, which Danielle co-wrote, to be available this holiday season. Melissa joined the MSPCA dog training program in 2004, after completing the Animal Behavior College program. In 2007 she completed both Dogs of Course Instructor Training Courses: Teaching & Training and Consulting & Problem Solving. She has assisted and trained under some of the top clicker trainers in the industry and credits these experiences with improving her training and coaching skills, as well as her ability to plan, coordinate and manage group classes. Melissa is a Certified Pet Dog Trainer (CPDT-KA) and has performed as a Mentor Trainer for Animal Behavior College and CATCH Canine Trainers Academy. She has also been an AKC Certified Canine Good Citizen (CGC) Evaluator since 2006. She has had numerous other customer-service and animal-care positions, and in 2012, she became an American Federation of Aviculture Certified Avicuturalist (CAFA2); she is a Senior Exotic Bird Advocate and Bird Task force member at the MSPCA at Nevins Farm; she is also involved in the shelter’s foster program. Besides training dogs, cats, and birds, Melissa is an artist who works in oil, watercolor, and pastel. Melissa shares her life with her partner, Bret, four dogs, several birds, and a tabby cat. She and her Australian Shepherds have participated in Agility, Conformation, Rally Obedience, Canine Musical Freestyle, Canine Drill Team, K9 Nose Work, and Obedience. Melissa teaches Puppy Play N’ Learn, Teen Puppy, Learn to Train Your Dog: Levels 1 & 2, Canine Good Citizen Prep, and Control Unleashed.