Vestibular disease is a common clinical presentation in dogs with neurologic dysfunction. The vestibular system is the system of balance and equilibrium and is comprised of the inner ear (saccule and utricle), vestibular portion of the vestibulocochlear nerve (cranial nerve VIII), the brainstem, and the vestibulocerebellum (flocculonodular lobe, fastigial nucleus, and caudal cerebellar peduncle). Dysfunction in any of these regions will result in similar vestibular symptoms including a head tilt, leaning or falling to one side, tight circling, pathologic nystagmus, and/or positional ventrolateral strabismus (see Figure 1). Typically, these clinical signs all occur on the same side as the lesion with the exception of the fast phase of the nystagmus which occurs away from the lesion. However, lesions of the vestibulocerebellum will cause vestibular symptoms on the opposite side of the lesion, hence the term paradoxical vestibular disease. 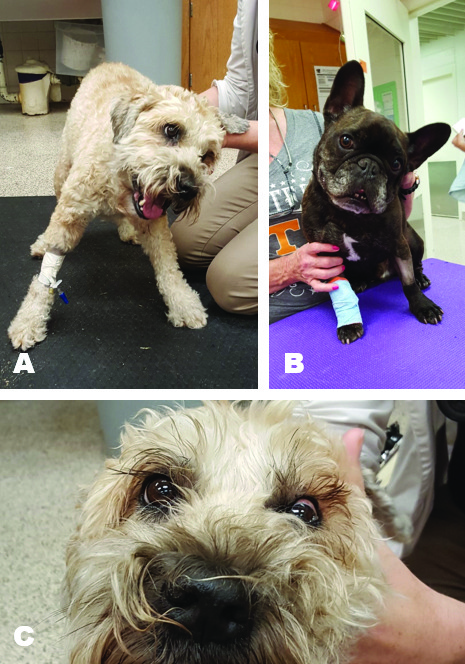 There are many causes of acute onset vestibular signs in older dogs. The first step in determining probable differentials is to determine whether the neuroanatomic localization is central or peripheral vestibular disease. What aides us in determining a specific neurolocalization with vestibular disease is not necessarily the vestibular symptoms (which can all look very similar no matter the specific localization), but rather the additional (i.e. non-vestibular) neurologic signs that can be caused by lesions in a given area. For example, with a lesion in the brainstem, you can expect to see not only vestibular signs, but also ipsilateral paresis, ipsilateral proprioceptive or postural reaction deficits, mentation change, and/or other ipsilateral cranial nerve deficits.  With a lesion in the vestibulocerebellum, one might expect to see other cerebellar symptoms such as proprioceptive or postural reaction deficits, wide based stance, truncal sway, hypermetria, dysmetria, or an intention tremor. Lastly, with a peripheral lesion, the only additional signs that may be seen are ipsilateral Horner’s syndrome and/or ipsilateral facial nerve paralysis. Correctly localizing a vestibular lesion to the central or peripheral vestibular system is critical in establishing appropriate differential diagnoses and thus an appropriate course of action.

Common causes of acute onset vestibular signs in old dogs include idiopathic vestibular disease, otitis media/interna, ischemic stroke, and neoplasia. Other important but less common causes may include hypothyroidism, toxins/drug (e.g. metronidazole), or meningoencephalitis. Important factors to consider when developing a differential list include:  the signalment of the dog; the rapidity of onset of clinical signs; whether the dog is exhibiting central or peripheral vestibular signs; whether the clinical signs have improved, remained static or gotten worse over time; and if the signs have improved, how rapidly have they improved (see Table 1).

Some might ask, if dogs get better after a stroke without treatment (just like they do with idiopathic vestibular disease), why is there a need to distinguish between these two diseases? About 50% of dogs that suffer from strokes have an identifiable underlying cause that predisposes them to having continued strokes, and thus, puts them at risk for continued morbidity or even mortality. Possible underlying causes of strokes in dogs include:

If a dog suffers a stroke, it is important to identify and treat any underlying cause(s) to help reduce the risk of further strokes and other morbidity. Diagnostic evaluation of a possible or confirmed stroke case should include:

In summary, there are many causes of acute onset vestibular disease in geriatric dogs, some of which can be relatively easily managed if correctly identified (e.g. otitis media/interna, idiopathic vestibular disease). However, it can be very easy to make an incorrect presumptive diagnosis due to similarities in clinical presentation thus putting the patient at risk for further morbidity or even mortality. History or examination findings that warrant consideration of referral to a specialist for imaging (typically MRI) include progression of clinical signs over time, neurologic examination findings suggestive of central vestibular disease, and/or recurring vestibular episodes.