Finding a new lump or bump on (or just under) your dog’s skin can be scary, but the good news is that 60-80% of canine skin masses are benign. The appearance of a mass doesn’t tell us whether it is cancerous or benign, so any new skin growth should be brought to your veterinarian’s attention. Your vet may recommend using a needle to obtain a small number of cells from the mass for evaluation (fine needle aspirate), removing a piece of the mass in order for a pathologist to evaluate it (biopsy), surgically excising the entire mass and submitting it to a pathologist, or careful monitoring of the mass for a period of time to see if it resolves on its own. Below is a list of some benign skin masses that are common in dogs.

1. Lipoma – Lipomas are benign tumors composed of fat, and they are usually found under the skin of middle-aged to older dogs. They tend to grow slowly and don’t cause a problem for most dogs. Occasionally surgical removal is recommended if the lipoma is large and in a location where it hinders mobility. 2. Sebaceous Adenoma – Sebaceous adenomas are benign growths of the oil producing glands in the skin. They are small (usually <1cm), white to pink in color, have irregular borders, and sometimes secrete a greasy white material. Sebaceous adenomas don’t usually create any problems for the dog, but occasionally the growths can become traumatized and cause local inflammation or infection.

3. Papilloma – Papillomas are viral warts that are contagious between dogs. The most common papilloma virus causes warts in and around the mouth of young dogs, although they can appear anywhere on the body and in any age dog. The warts tend to be small and round, with a cauliflower like appearance. Papilloma warts usually dry up and fall off on their own within a few months, after the dog’s immune system matures enough to be able to fight off the virus. A severe case of papilloma warts may make eating and swallowing very difficult for the dog, and in these cases treatment is recommended. The most effective treatment usually involves wart removal by traditional surgical methods, freezing off (cryosurgery), or laser, however medications and techniques like crushing of the warts to stimulate the response of the immune system are sometimes used. 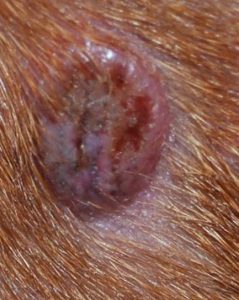 4. Histiocytoma – Histiocytomas result from the overgrowth of a cell in the skin that is part of the dog’s immune system. The resulting mass is usually quite round and red, and is sometimes referred to as a “button tumor” due to its appearance. Histiocytomas are more common in young adult dogs and they usually go away on their own within a couple of months.

5. Acrochordon – These growths, otherwise known as skin tags, are usually the same color as the skin and extend out from the body on thin stalks. They form as a result of an overgrowth of the connective tissue of the skin and are generally harmless. They are more common in older dogs, in certain breeds (such as the cocker spaniel), and in areas of the body where skin rubs against skin (such as the armpit). 6. Follicular Cyst – These benign, circular masses contain an inner lining that secretes thick gray or yellow-brown material. They arise from a blockage of a hair follicle or sebaceous gland. Rupture of these cysts can cause significant local pain, inflammation, and infection as the body treats the cyst contents as foreign material. Follicular cysts are usually fairly small (roughly 1cm in diameter) and solitary, although some dogs will develop many cysts and they can grow up to several centimeters in diameter.