Eyelid agenesis, or eyelid coloboma, is a congenital defect of the eyelid in which typically the upper lateral eyelid is not formed (Belhorn et al, 1971). Eyelid agenesis is most common in the cat, and is rare in dogs. The result is that conjunctiva is contiguous with skin, and this leads to exposure of the cornea from incomplete blinking, as well as irritation from contact of hairs with the cornea (trichiasis; Figure 1). Keratitis (vascularization, ulceration, scarring, and/or corneal pigmentation) can then occur, and over time vision can be affected (Figures 2 & 3). Catastrophic corneal infection is also a possibility. The lesion is typically bilateral, although the eyelids can be affected to differing degrees. Eyelid agenesis may also be associated with other congenital lesions (e.g. persistent pupillary membranes; Figure 4). Figure 1 – Superior-lateral eyelid agenesis of the left eye of a cat; note the lack of a formed eyelid margin along with trichiasis – numerous long hairs lie on the corneal surface. Fluorescein dye has been applied to the eye. 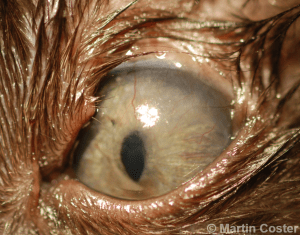 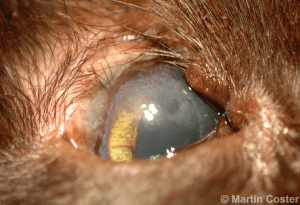 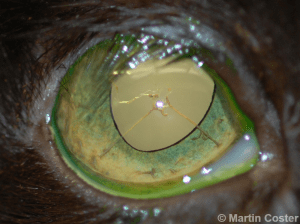 For temporary relief from trichiasis and corneal exposure, medical management with artificial tears ointment as needed every 4-8 hours can be tried, although some cats may be irritated by the ointment base (Eördögh et al, 2015). Secondary corneal ulceration should be appropriately managed with topical antibiotics (e.g. erythromycin q6-8h) and pain control (e.g. sublingual buprenex and/or topical atropine ointment).

Numerous surgical procedures have been reported for the correction of eyelid agenesis ‑ there is not one perfect way to correct the defect. The choice of surgical technique may depend on the size of the defect, severity of secondary corneal changes, financial constraints, and outcome expectations. For very small defects or cases of limited financial resources, manual epilation (i.e., plucking the hairs) can provide temporary relief but may need to be repeated up to every month as hairs regrow.

For permanent hair destruction, liquid nitrogen cryotherapy of the conjunctival-skin margin can be very efficacious. Two freeze-thaw cycles are typically applied with a direct contact probe to the skin, although care must be taken not to over-freeze which can result in full-thickness tissue necrosis. Protection of the cornea with a corneal shield is paramount during cryotherapy.

Figure 5 shows the immediate post-operative appearance with eyelid swelling and hyperemia expected; Figure 6 is of the same cat once this resolved. Due to variability in results (potential for hair regrowth), multiple procedures may be required (Figure 7). Figure 6 – The same cat from Figure 5, following resolution of post-operative swelling; the eyelid defect still exists but trichiasis has been alleviated. Figure 7 – Leukotrichia (whiteness of hair) following previous liquid nitrogen cryotherapy and epilation of trichiasis in feline agenesis. Note the ongoing trichiasis and keratitis. Cryotherapy was elected to be repeated in this case.

For definitive correction, reconstructive eyelid surgery aims to provide a functional eyelid margin, and 1-, 2-, and even 3- stage procedures have been reported. To name just a few, these including transposing part of the lower lid (e.g., the cross lid flap described by Munger and Gourley in 1981 and, more recently, a modification of the Mustardé technique described by Esson in 2001), “bucket-handle” grafting in which facial skin is transposed beneath the eyelid margin to cross to the other eyelid, and rotational skin flaps.

The author has recently had good success using the lip commissure to eyelid transposition surgery, which is a single-stage surgery. This procedure was first published in JAVMA by Dr. Pavletic in 1982 as a method of lower eyelid reconstruction in dogs. The technique was adopted for upper eyelid agenesis in cats, by Whitaker et al in 2010. In this procedure, a rotating skin flap incorporating the lip commissure is created, mobilizing the lip tissue to replace the missing eyelid. The transposed oral mucosa is sutured to the conjunctiva, the lip commissure (now shorter but still functional) is closed, and the skin graft is then closed in a routine fashion (Figure 8). In addition to providing static protection to the cornea, this lip tissue will often “blink” along with the remaining upper eyelid. Potential complications can include graft dehiscence or necrosis, ongoing trichiasis, and poor ability to blink; however most do well (Figure 9). 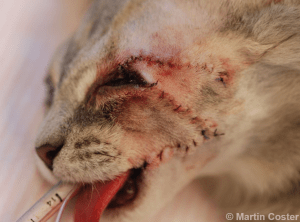 For more information about Angell’s Ophthalmology service, please visit www.angell.org/eyes. Dr. Coster can be reached for consults or referrals at 617-541-5095 or ophthalmology@angell.org