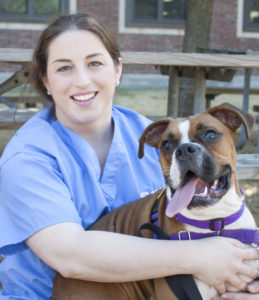 Of the thousands of mushrooms found in North America, less than one hundred are toxic. Unfortunately, there is no simple test or defining characteristic to distinguish non-poisonous from poisonous mushrooms. If you are concerned that your pet ingested mushrooms and is suffering from mushroom toxicity, you can go back to the area of suspect ingestion, collect mushrooms, and record details of the environment in which they were found to be sent to an expert mycologist for identification. The best way to protect your pet(s) from toxicity is to prevent exposure through the removal of all wild mushrooms from your yard and keeping animals on leash during walks in the woods, especially during peak times of growth – September and October with even more growth during very warm wet years. Image 2: White button mushrooms – these are non-poisonous mushrooms that look very similar to the toxic mushroom in Image 1 above.

Just as there are many types of poisonous mushrooms, there are many different types of toxicity that they cause. For instance, poisonous mushrooms can result in varying degrees of gastrointestinal upset, neurologic dysfunction (e.g. changes in behavior, vocalization, unsteady gait, and seizures), and liver failure. With the exception of hepatotoxic (toxic to the liver) mushrooms, all other toxicities secondary to mushroom ingestion have a good prognosis, such that full recovery occurs in 1-2 days with aggressive supportive care. However, hepatotoxic mushrooms are the most commonly reported mushroom toxicity and will therefore be the focus of this article.

The toxic agent in hepatotoxic mushrooms is amanitin. Amanitin inhibits protein synthesis, which in turn leads to cell death, and organs with higher metabolic rates such as the intestinal tract, liver and kidneys are most affected. The concentration of amanitin in a mushroom varies based on the time of year, growing conditions, and moisture, so it is difficult to know the volume of mushrooms needed to be ingested to cause toxicity. However, looking at the average concentration of amanitin, ingestion of only a few mushrooms can cause toxicity and have the potential to be lethal in smaller animals. Furthermore, while all species with the exception of rodents are susceptible to amanitin toxicity, dogs are at the greatest risk since their intestinal tracts absorb a higher concentration of the toxin compared to other species.

There are four distinct phases during the course of amanitin toxicity, although not every affected animal will experience all four phases. First is the latency period, which lasts for 8-12 hours from the time of ingestion to the time that symptoms are seen. The second phase, which lasts from 6 to 24 hours post-ingestion, is when the first signs of toxicity develop, which is gastrointestinal upset characterized by vomiting, diarrhea and severe abdominal pain. The third phase is the false recovery period, in which the animal appears to be 100% normal. This phase can last from a few hours to several days. During this phase, liver and kidney damage can develop and therefore serial monitoring via bloodwork is imperative during this stage. The fourth and final phase occurs between 36 and 48 hours post-ingestion and is when fulminant liver failure as well as possible other organ failure (e.g. kidney) can develop. During this phase, patients can have low blood sugar, lethargy, anorexia, blood clotting abnormalities, unsteady gait, seizures, coma and ultimately death.

There is no antidote to amanitin toxicity and treatment focuses on immediate decontamination (e.g. induction of vomiting, gastric lavage, and administration of activated charcoal) to prevent further exposure to the toxin and aggressive supportive care of the symptoms that present. For instance, gastrointestinal signs are treated with IV fluids to prevent dehydration, anti-nausea medications, antacids and anti-diarrheal medications. Liver failure is treated with liver supplements such as denamarin, N-Acetylcystine, and vitamin K. Seizures secondary to liver failure are, depending on the cause, addressed with dextrose supplementation, antibiotics, a low protein diet and/or anti-epileptics.

Despite early and aggressive identification and treatment, prognosis is guarded to grave. Therefore, prevention by way of minimizing exposure to potentially toxic mushrooms is of paramount importance.