The following is an update on Feline Cutaneous Adverse Food Reactions (feCAFR), which is a chronic pruritic non-seasonal problem.  Adverse food reactions are observed with or without concurrent gastrointestinal symptoms1-2 as symptoms caused by food ingredients like pharmacological/chemical contamination or spoiled marine fish (scrombroid producing bacteria) can present with both skin and gut manifestations. CAFR is likely slightly under diagnosed in general, but likely not under treated in most practices. This is in part due to numerous non-specific allergy treatments (like glucocorticosteroids, cyclosporine or even megestrol acetate) with the ability to control a large number of clinical symptoms associated with allergies. Beneficial treatment is also in part due to feCAFR symptoms often being misinterpreted as relating to other conditions and the dermatological symptoms of the feline patients being managed directly or indirectly when the cats are being managed for psychogenic disorders, ectoparasites, inflammatory bowel disease (IBD), secondary pyoderma, etc.

For decades, the intermittent prescription of empirical systemic steroids likely also managed the pruritic symptoms of feCAFR in many feline patients, without a specific cause or diagnosis ever being identified. Over the last couple of decades more and more feline patients have undergone food elimination trials with various degrees of success.

Several text books list pruritus as present in 100% of all feline CAFR patients.1,2,3 Symptom history is non-seasonal pruritus with a cervical-facial distribution being overrepresented.1,2, 3 The age of onset in the majority of patients is before 3-5 years of age (but age of onset in patients over 10 years of age is known to occur). Some authors suggest that food antigen sensitization is a slow process, potentially taking many months (up to 18 months). The slow sensitization process may explain why we encounter very few CAFR cases in cats less than one year of age, which differs from the typical experience with canine adverse food reactions. There is no known sex or breed predisposition consistently identified and the incidence of feline CAFR is reported to be between 1-17% in the literature.1-5  These observations are often based on relatively small samples sizes (under 25 cats), illustrating the lack of double blinded randomized studies of the subject of feCAFR in our profession.3-5 In humans the incidence is estimated to be around 2% of the total population with a much higher prevalence of up to 6% in children age 0-6 years of age. Just like any other chronic feline clinical condition, the medical records can provide useful clues to get closer to a diagnosis of CAFR. When reviewing medical records of patients with feCAFR we will often find that prednisolone (or prednisolone equivalent) is able to control clinical symptoms, and this finding can be used as a pseudo-clinical finding very supportive of a diagnosis of feline allergies. It also allows one to eliminate most differentials involving psychogenic-induced alopecia as most, if not all, behavioral dermatopathies in cats will fail to respond16. 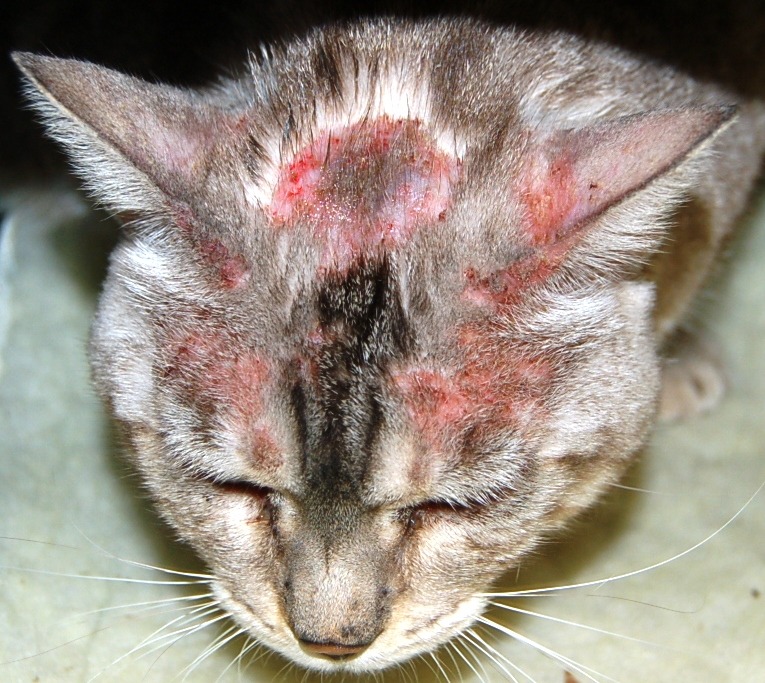 Image 1: Classic feline with mild to moderate miliary dermatitis on top of the head with erythema and alopecia

It is important to point out that the same effects are not always seen when the patients have been treated with prednisone as a number of cats are unable metabolize that form of glucocorticoids.11 Otitis externa appears to be less frequently associated with allergic dermatopathies in felines when compared to its canine counterparts, and in a recent study only 7% of CAFR cats had symptoms of frequent episodes of otitis externa.11

The presenting symptoms have a few characteristic clinical dermatological patterns and I have listed these in order of occurrence among feCAFR patients seen at the Angell Animal Medical Center dermatology service in Boston: 1) miliary dermatitis and auto-mutilation associated lesion on cervico-facial regions 2) Eosinophilic Granuloma Syndrome (EGS) 3) mixed 4) symmetrical alopecia Image 3: Eosinophilic granuloma Syndrome presenting with plaque like lesions in the inguinal zone and knee folds. Image 4: Eosinophilic granuloma Syndrome with the maxillary lip being obliterated with an indolent ulcer often called “rodent ulcer”. This term refers to how humans affected similarly with an eosinophilic granuloma syndrome of their lips clinically resembles the lip configuration of rodents. Image 5: Symmetrical Alopecia of the lower flanks and ventrum without any sign of skin damage or inflammation, these symptoms are more frequently associated with feline atopic dermatitis than feCAFR.

Secondary infections (bacteria, dermatophytes) and ecto- and endo-parasites (demodex spp., fleas, cheyletiella spp., notoedres spp., otodectes spp., hookworms, etc.) often complicate the clinical picture and should be addressed as part of the work up. Yeast dermatitis is not a common feature in feline dermatitis except in the sphinx and Devon Rex breeds.12 All of these dermatological symptoms can further occur with or without concurrent gastrointestinal symptoms (e.g. frequent diarrhea, vomiting and malabsorption problems). Additionally feCAFR can be seen concurrent with “classic” atopic dermatitis (environmental allergens). According to Bieber & Bussman,6 in humans, “food hypersensitivity affects 10-30% of infants and children with atopic dermatitis.” Flea and/or mosquito bite hypersensitivity is also known to occur concurrent with feCAFR, and a few rare reports of neurological and respiratory symptoms are found in the literature.5,6 Ruling out main differentials to Eosinophilic Granuloma Syndrome (EGS) includes neoplastic conditions, foreign body granuloma, fungal or bacterial ulcerative and or granulomas.15 None of these incidences are well established in the literature or among “experts,” all in all adding to the “confusion” among clinicians working with feCAFR.

The exact cause is currently unknown, but most theories of the pathophysiology of feCAFR label CAFR a multifactorial disease. There is likely a genetic predisposition for inappropriate immunological responses (hypersensitivity) to otherwise completely benign ingested food antigens, which leads to a sensitization. Upon repeated exposure, an immune mediated hypersensitivity reaction is triggered, which is the cause of the symptoms of pruritus, auto-mutilation, EGS, symmetrical alopecia or all of the above. The actual etiology of CAFR in animals is not yet fully known and most theories in veterinary medicine originate from the human literature. In humans, food hypersensitivities is considered a ‘classic’ type I reaction associated with serum IgE production against food epitopes. These IgE antibodies usually bind to allergenic epitopes on proteins weighing more than 10 kDa (i.e. food allergens usually are larger glycoproteins).1,2,3,13 For the last couple of decades this knowledge has allowed food manufacturers to create a dietary “treatment” for adverse food reactions by hydrolyzing glycoprotein epitopes into smaller fragments which do not cross-link to IgE receptors on the mast cell surfaces. This process was originally used for children with a cow’s milk allergy.9

The use of serology and/or skin testing for food allergy in both dogs and cats has long been a source of discussion and confusion among veterinarians. To the best of our understanding, the involvement of IgE/IgG antibodies in food feCAFR is not as quantifiable and clinically relevant as the allergy testing options have been for atopic dermatitis. Therefore the general consensus is that the various testing modalities currently being offered commercially for CAFR have little or no clinical value in the work to identifying the cause of clinical symptoms in the majority of cats.

Currently accepted among most dermatologists is conducting a strict diet elimination trial for 60 to 90 days followed by a provocation/diet challenge for up to 14 to 21 days as the best and most reliable diagnostic method for cats suspected of having feCAFR. 2,8,13 The diet elimination trial should be very strict with all other protein sources (including flavored medications, treats, and toothpaste) avoided. The protein source being fed for the duration of the diet trial should be a true novel protein source (i.e. an exotic meat source) such as rabbit, venison, elk, moose, calamari, goat, kangaroo, or alligator. Commonly used dietary meat sources like beef, poultry, pork, fish or lamb should be avoided. The novel single protein diet can be formulated by a veterinary nutritionist and home cooked, or commercially manufactured (veterinary diet grade dry, canned and treats), but there has been some concern about cross contamination of protein sources in pet food manufacturing.9 The more common practice, and often more practical option for the owner is to use high quality hydrolyzed protein sources for the diet trials of cats and dogs. There is good evidence that the clinical effect is reliable and reproducible if the pet owner is able to keep the cat exclusively on the diet for the 60-90 day duration needed for clinical improvement of symptoms to be clear.13 In my opinion, it is imperative that we always have the owners do the provocation or diet challenge phase at the end of all diet trials. This should be done to assure that any clinical improvement accomplished during the 60-90 day diet trial was truly a result of the diet trial and not coincidental due to change in environment or other possible symptom-causing allergens or factors.

The initial phase of a diet trial should be supported by medical management with antimicrobial therapy (e.g. systemic/topical antibiotics and occasional antifungals) if needed for secondary pyoderma, otitis, etc. There will often be a need for some form of anti-pruritic support (glucocorticoids) and these treatments can be a valuable help for the patient and the owners involved in the diet trial. I generally allow any needed treatment(s) to be sustained for up to 30 to 45 days of the total 60 to 90 day diet trial period. I generally recommend that the last 7-10 days prior to the provocation/challenge phase be without anti-pruritic support. I will allow antimicrobials if clinically relevant. If the diet trial showed clinically significant improvement in clinical lesions and pruritus and the subsequent challenge phase induced a clinically significant relapse of pruritus and/or clinical lesions, a successful diet trial is indicated. Management of feCAFR via restricted diet is the ideal outcome of a successful diet trial and can lead to a significantly lower level of dermatological allergy symptoms as long as the patient is not exposed to the potential offending dietary allergens. Some anecdotal reports are published of cats picking up possible additional food sources as part of the CAFR over time, but it appears to be fairly infrequent in occurrence. Cats are not people and appear not to “outgrow” their allergies as a significant number of children with food sensitives tend to do.6