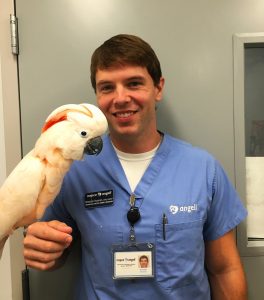 Guinea pigs commonly present through Angell’s emergency service for hematuria or dysuria which can relate to a wide variety of clinical conditions. A systematic approach to these cases with a knowledge of common underlying causes can allow for swift diagnosis. The history may include a change in appetite, stool production or vocalization during micturition. Clinical signs may be acute or chronic depending on underlying diagnosis. Physical exam will often reveal discomfort during caudal abdominal palpation. Successful treatment varies depending on a patient’s condition, severity of symptoms and which treatment options are pursued.

If hematuria is the primary complaint then confirming the owner’s concerns is the first step. Guinea pigs often have pale yellow to clear urine; however, pigmenturia can produce a range of colors from orange to brown to red. This is due to select pigments such as chlorophyll being excreted in the urine. A change in diet or introduction of food items high in beta-carotene such as carrots and spinach can account for more red pigments to be excreted. Photos of the urine or submission of a free catch urinalysis can rule out presence of blood. Typically these patients would have no other symptoms or pertinent exam findings.

Urinary calculi located in the urethral orifice of a sow

If caudal abdominal pain is elicited during palpation coupled with a history of other urinary symptoms then radiographs are recommended. Urolithiasis is a common finding in guinea pigs with no underlying sex predilection. Calcium carbonate stones make up 90% of those identified and are radiopaque. Stones are commonly identified in the bladder but can be located within the urethra, ureters or kidneys. Female guinea pigs occasionally have stones form within the distal urethra which can be missed if radiographs are collimated down to only include abdomen. Stones within the bladder and urethral stones are commonly associated with hematuria but can also impede micturition. Stones located within the kidneys and ureters are more often associated with pain, weight loss and occasionally hematuria. Radiopaque sediment may be noted in the absence of stones. Ultrasound can also be valuable in detecting location of stones and better evaluate changes to the urinary tract. Dilation of the renal pelvises in cases of hydronephrosis or thickening of the bladder wall in cases of cystitis may be recognized. Collection of a sterile urine sample via cystocentesis will allow submission of a urinalysis, microscopic sediment evaluation, and culture. Advanced imaging techniques such as contrast CT, excretory intravenous pyelograms or contrast urethrograms can all be considered for more complicated cases.

Medical management of urolithiasis in guinea pigs is often unrewarding. Cornerstones of treatment include increased water consumption and reduced calcium consumption. Providing water through a water bottle tends to increase daily consumption of water. Low calcium greens heavily wet down will also increase water consumption. Those greens identified to be high in calcium such as kale and parsley should be given sparingly. Pain is managed with nonsteroidal anti-inflammatory drugs (NSAIDs), opioids, tramadol or gabapentin. Multimodal management is used when symptoms are severe. NSAIDs are used more liberally in animals less than 3 years of age. Blood urea nitrogen (BUN) can be monitored using test strips and a small sample of blood. Stones smaller than 5mm may be able to pass given the diameter of the urethra. Stones formed in the urethral orifice of sows can be manually removed under general anesthesia. Urinary tract infections are often identified in conjunction with urolithiasis. Empiric treatment with Trimethoprim sulfa or Enrofloxacin should be considered while culture is pending. Potassium citrate orally has been used with the intent of preventing recurrence and reducing stone size with varied success. It binds gastrointestinal calcium and reduces urinary calcium excretion. Although rare, hyperkalemia is possible and should be monitored when using potassium citrate for secondary prophylaxis.

Surgical management is the only effective treatment for immediate remediation of urinary stones. However, abdominal surgery in guinea pigs tends to have higher morbidity and mortality when compared to rodents and rabbits and careful consideration should be given before performing surgery. While surgery is often successful, recovery in guinea pigs can be prolonged compared to other mammals. Urolithiasis recurrence is common after surgery. In cases where hematuria recurs soon after surgery, radiographs should be repeated. Potassium citrate may help reduce potential reformation.

Reproductive disease is another important differential diagnosis in female guinea pigs for hematuria. A mass effect may be identified from ovarian cysts or an enlarged uterus. Ovarian cysts can be functional (follicular) or non-functional (serous). Follicular cysts are often associated with bilaterally symmetric non-pruritic alopecia and hyperkeratotic nipples. Serous cysts tend to be non-functional but can become large. Presentation for serous cysts is often due to a space occupying effect that causes discomfort. Endometrial hyperplasia can be associated with follicular cysts resulting in vaginal bleeding often misconstrued as hematuria. Common uterine tumors include leiomyosarcoma, endometrial adenoma, and adenocarcinoma. Any of these masses can be associated with intermittent bleeding. However, GI stasis, weight loss or abdominal pain are potential causes for presentation. Ultrasound is recommended to best characterize palpable changes of the reproductive tract in order to make the best treatment recommendation. Non-neoplastic processes identified could include endometritis or pyometra. Surgical excision after stabilization would be recommended for uterine disease. Given the varied recovery after ventral abdominal surgery, a flank approach is preferred for ovarian cysts.

A systematic approach to hematuria in guinea pigs can help narrow your list of differentials. Using a combination of physical exam findings, imaging modalities and diagnostic tests will allow the clinician to make the best medical and surgical recommendations to resolve the underlying condition.