Surgical Management of Canine Glaucoma: Show Me the Numbers 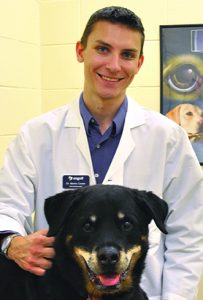 Glaucoma is one of the most common eye diseases and causes of blindness of dogs. Although there are numerous medical therapies for glaucoma, there is no de facto cure and many cases will eventually develop a break-through elevation in intraocular pressure (IOP) resulting in pain and vision loss.

When medical management of glaucoma fails, there are vision-saving surgical options available. The parameters for making a surgical decision are quite nuanced, depending on the individual patient, client, and even the attending ophthalmologist. Since the risks of surgery can include IOP exacerbation and blindness, the risks and benefits of any surgical procedure must be carefully considered. There are only a handful of articles reporting actual success rates of surgical management of glaucoma. This article presents reported objective success rates, to better inform subjective decision-making parameters.

Just as with medical management, there are two general categories of surgical therapy – those that increase outflow of aqueous humor (drainage or shunting procedures), and those that halt the production of aqueous humor (via destruction of the ciliary body or cycloablation). In veterinary medicine, cyclodestructive procedures tend to enjoy greater success than shunting procedures, although often the two are combined. Over the past 20 years, there has been an evolution of surgical glaucoma management, starting with transscleral application of first liquid nitrogen and then diode laser energy to the ciliary body, continuing with endoscopic lasering from within the eye, and most recently coming full circle to transscleral application of MicroPulse® laser energy. The lines are blurred between these “past”, “present”, and “future” therapies, with no single procedure standing out definitively as a “gold standard.”

Transscleral cyclocryotherapy, or the application of a liquid nitrogen-cooled contact probe to the sclera overlying the ciliary body, was initially reported for surgical control of glaucoma. This was then largely and quickly replaced with diode laser transscleral cyclophotocoagulation (TSCP). In this procedure, diode laser energy is applied with a contact probe positioned external to the sclera, 3-4 mm posterior to the limbus, presumptively overlying the location of the ciliary body (Figure 1). Figure 1: Transscleral cyclophotocoagulation for glaucoma (in a rabbit), with the diode laser unit inset. The globe is stabilized with forceps at the limbus and laser energy applied in a transscleral fashion, posterior to the limbus overlying the presumptive location of the ciliary body.

TSCP can be combined with aqueous humor drainage devices. The Ahmed valve gonioimplant is the most popular of such devices (Figures 2-4). It consists of a footplate that is placed between the sclera and conjunctiva and is sutured to the sclera, with tubing that is inserted into the anterior chamber. Aqueous humor thus flows out of the tubing into the footplate area, where it is absorbed by the conjunctiva. Short-term failure can occur due to occlusive fibrin formation in and around the tubing. Long term, this and scar tissue occluding the footplate absorption area, or extrusion of the implant, can also cause failure. Figure 2: Ahmed valve gonioimplant (footplate with suture holes to the right, tubing to the left). Figure 3: Ahmed valve gonioimplant in place in the left eye of a dog. Note the tubing entering the eye at the limbus at the 1 o’clock position. Figure 4: Two Ahmed valve gonioimplants in place in the right eye of a dog. Note the tubing entering the eye at the limbus at the 7 and 11 o’clock positions. This dog maintained intraocular pressure and vision for a year following TSCP and the first Ahmed valve placement, but a second valve was then placed for recurrent glaucoma.

Table 1 presents a summary of the one-year outcome for IOP control and vision in 6 reports on the use of TSCP alone or in combination with Ahmed valve placement. Control of IOP for one year was reported in 51 to 92% of patients whereas vision was present at one year in 41 to 89% of patients (although all but one study was in the 40-60% range for vision).  Combining all these studies into one patient population results in one year IOP control in 132/197 (67%) and one year vision in 56/105 (53%).

* The 1999 study includes cases treated with liquid nitrogen cyclocryotherapy instead of laser.

Building on this technique, diode laser endoscopic cyclophotocoagulation (ECP) is a more recent advance in glaucoma therapy. By inserting an endoscope directly into the eye, typically via a limbal incision, the ciliary processes of the ciliary body can be directly visualized (Figure 5) and thus laser energy can be applied more directly than is possible via the transscleral approach. This allows lower energy settings to be used, potentially reducing complications such as inflammation and hemorrhage, and thus improving the potential for success. Unfortunately, the lens precludes visualization and treatment of the entire ciliary process, and thus a decision must be made to only treat the visible portion of the processes or (more commonly) to concurrently surgically remove the lens as in phacoemulsification cataract surgery, increasing cost. A video of the ECP procedure is available with this article and can be viewed here: https://www.mspca.org/wp-content/uploads/2018/03/ECP-1.mov. The video shows the ciliary processes being laser ablated from the bulbous head at the top of the screen to the tapering tail lower down. The red laser aiming beam is visible and the ciliary process turns white and contracts as it is lasered.

To the authors’ knowledge, there are no peer-reviewed publications on the use of ECP in dogs. However, in 2013 Lutz et al presented an abstract at the annual meeting of the American College of Veterinary Ophthalmologists (ACVO), reporting the outcomes in 309 dogs treated with ECP. Primary glaucoma was present in 86 dogs (97 eyes), and secondary glaucoma in 171 dogs (212 eyes). The outcomes for IOP control and vision in both of these cohorts combined are presented in Table 2.

Table 2: Outcome of diode laser endoscopic cyclophotocoagulation for control of primary and secondary glaucoma in dogs, as reported by Lutz et al (2013).

Finally, the newest reported modality available to treat canine glaucoma is the MicroPulse® system by IRIDEX Corporation. Returning to the transscleral method of energy delivery, this laser has an on-off duty cycle that allows the treated tissue to cool between bursts of energy. The spread of heat to adjacent tissues is thus reduced, decreasing the potential for complications.

MicroPulse® transscleral diode laser cyclophotocoagulation (mTSCPC) was reported in 2 abstracts at the 2017 ACVO conference. Sapienza et al reported a 53% (17/32) success rate for a single lasering, and 75% (9/12) for repeat lasering, giving an overall 81% (26/32) success rate in controlling IOP. Sebbag et al controlled the glaucoma of 50% (7/14) of their cases, with IOP reducing 50-87%. These preliminary results are encouraging, but peer-reviewed studies with greater numbers of cases are needed, and to the author’s knowledge, there are few places that have this laser available at the present time.

One year outcomes are typically reported as a benchmark for success in glaucoma surgery, balancing the need for longterm data with loss of cases to follow-up. The bulk of the data available in veterinary medicine on outcomes following glaucoma surgery are on transscleral cyclophotocoagulation, with or without Ahmed valve placement. Although not scientifically appropriate, combining all reported studies from 1997-2011 on TSCP shows one year IOP control in 132/197 (67%) and one year vision in 56/105 (53%). More peer-reviewed data are needed to better understand the benefits of endoscopic cyclophotocoagulation over TSCP. MicroPulse® therapy similarly awaits further investigation.

Lin SC. Endoscopic and transscleral cyclophotocoagulation for the treatment of refractory glaucoma. Journal of Glaucoma 2008;17:238–247. https://www.ncbi.nlm.nih.gov/pubmed/18414112