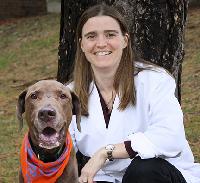 Amputation of a pet’s limb may represent one of the toughest surgical decisions an owner could face. In addition to the constant visual reminder of the lost appendage (in comparison to the removal of an internal organ such as the spleen, for example), an owner may be wracked with concern about how the pet will compensate physically and whether the pet will have a good quality of life after surgical recovery. Sometimes, the decision must be made rather abruptly following a pathologic fracture, leaving limited time for mental/emotional preparation. Fortunately, though, the prognosis is good with regards to functional outcome and activity level.1 In addition, there are some thoughtful books available as coping references for owners and children. 4,5

Malignant neoplastic processes—such as osteosarcoma—may have a range of radiographic and gross manifestations which could overlap inflammatory, benign, or other neoplastic diseases warranting a treatment modality other than amputation (Figure 1). Cytologic diagnosis or histopathology of an incisional biopsy typically precedes whole limb amputation at Angell. As a result, there are very few “surprise” diagnoses following histopathology of an amputated limb. However, sometimes a limb is removed for palliative reasons prior to diagnosis in instances of significant debilitating disease, acute pathologic fracture, or inability to collect a diagnostic sample pre-amputation. A database search was performed to determine histopathologic diagnoses from amputated limbs submitted to Angell pathology. It is important to note the inherent bias in this data set, as it includes only limbs that were submitted for histopathology. For example, amputation specimens which may not be submitted for evaluation include limbs being removed for known traumatic injury, situations in which financial restraints preclude submission for pathology or circumstances in which histopathology is declined.

Figure 1. Sagittally-sectioned long bones showing three separate gross manifestations of osteosarcoma in dogs. The left image has an irregular off-white medullary infiltrate (A) which is both lytic (effacing bone) and productive (forming hard structures). The center panel has marked osteolysis with cavitated blood-filled spaces (B) and may resemble hemangiosarcoma. The right panel is a relatively discrete lytic lesion (C) without notable bony production. Differentials based on radiographs for this lesion included infectious or neoplastic processes.

Between July 2009 and August 2017, the Angell Pathology Service received 164 amputated canine limbs, which included 96 thoracic limbs and 68 pelvic limbs. A summary of pathologic diagnoses is included in Table 1. Osteosarcoma (n=95), chondrosarcoma (n=5), and medullary fibrosarcoma (n=5) are included under the umbrella of “primary bone tumors”, and composed about 64% of the submitted cases. Other sarcoma types, including soft tissue sarcoma, hemangiosarcoma, histiocytic sarcoma (frequently periarticular), and synovial cell sarcoma made up another 25% of submissions. Thus, almost 90% of limbs submitted for histopathology at Angell were afflicted with some type of soft tissue or bone sarcoma. *one osteosarcoma was extraskeletal; one medullary fibrosarcoma occurred at a site of prior tibial plateau leveling osteotomy (TPLO) implant placement; the metastatic carcinomas included one nasal and one pulmonary carcinoma; infection/necrosis diagnoses included one case of coccidioidomycosis and one limb infarction from thrombosis † one squamous cell carcinoma and one apocrine gland adenocarcinoma ‡myxoma in JSAP 2015 report and rhabdomyosarcoma in BMC Vet Res 2016 report

Thirty-four amputated feline limbs were received during the same time period listed above, of which 13 were thoracic limbs and 21 were pelvic limbs. It is interesting to note that more pelvic limbs were submitted in cats whereas thoracic limbs were more common in dogs. Diagnoses for feline amputation specimens are listed in Table 2. In contrast to the findings in dogs, almost 45% of feline limbs had soft tissue sarcoma (soft tissue mesenchymal tumors such as fibrosarcoma, anaplastic sarcoma with giant cells, or vaccine-associated sarcoma; n=15, see image in Table 2). Approximately 25% of submissions could be categorized as primary bone tumors. A greater proportion of round cell neoplasia (lymphoma and plasma cell tumor) was diagnosed relative to dogs.

Four rabbit pelvic limbs were submitted to Angell pathology service during the eight-year interval, including two soft tissue sarcomas, one poorly-differentiated sarcoma suspected to be osteosarcoma, and one granular cell tumor with abscessation. An amputated thoracic limb from a mouse was diagnosed with locally expansive mammary carcinoma, and an amputated parrot limb contained cutaneous squamous cell carcinoma.

In a 2015 JAVMA retrospective study detailing outcomes following canine limb amputation, about 53% of cases were primary bone tumors and another 25% were soft tissue sarcomas, paralleling the Angell statistics.1 A 2015 retrospective study in the Journal of Small Animal Practice describing complications following limb amputation listed about 51% primary bone tumors and 13% other sarcomas in dogs.6 Similarly, a smaller 2016 prospective study evaluating recovery of canine pelvic limb amputees included 50% osteosarcomas and 25% other sarcoma types.3 The 2015 Journal of Small Animal Practice report of complications listed above also documented 36% soft tissue sarcomas and 21% primary bone tumors in cats, with non-neoplastic processes comprising the greatest proportion of cases (39%).6 Summarized data from the above studies are included in Tables 1 and 2. Finally, in a retrospective survey of feline amputee owners in the United Kingdom, non-neoplastic processes (mostly fractures or trauma) represented the vast majority of cases (>90%).2 In all the above studies, there was a greater proportion of non-neoplastic diagnoses (including severe traumatic injury) relative to the Angell summary. Amputation specimens from known traumatic injury may not routinely be submitted for pathology, therefore this cohort was not adequately captured in the Angell data set.

In summary, neoplastic processes necessitating the removal of a canine limb are overwhelming of mesenchymal origin, with between 50-65% of cases qualifying as primary bone tumors in our records as well as in several published reports. A wide array of other sarcoma types, including many soft tissue sarcomas, also result in limb amputation in dogs. In cats, soft tissue sarcomas tend to outnumber primary bone tumors as the most common neoplastic diagnosis. Pelvic limbs are more commonly submitted from cats compared to dogs, perhaps due to the development of vaccine-associated sarcomas in this species. If incorporated into the data, severe traumatic injury would presumably comprise a significant portion of amputations in both species, particularly cats.